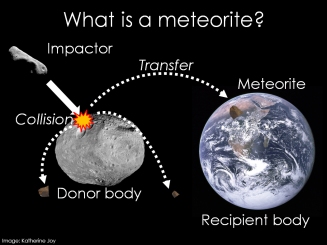 Meteorites are rocks that are found here on Earth, but that originated from space. Meteorites come from bodies in the asteroid belt, the Moon or Mars that are on Earth-crossing orbits. They enter the Earth’s atmosphere as fireball (meteor) events, which can often be dramatic, being accompanied by high altitude breakup, flashes of bright light and shock waves. The surviving rock fragment can vary in size from a few cm to a couple of meters in size. The exterior of the meteorite is often super heated forming an ablated surface called a fusion crust (the colour depends on the type of meteorite, but this is often a characteristic black colour), but the interior of the stone survives the dramatic entry event.

Meteorites are recovered either as fall or finds – where falls are collected after a fireball event is witnessed, and finds are recovered a long time after the original entry event (often many thousands, to hundreds of thousands or even millions of years afterwards).

There are many many different types of meteorites that come from different parent bodies including asteroids, the Moon and Mars. Sometimes we can directly relate a meteorite group to a particular parent body because they have a similar chemistry or age (this works well for lunar and martian samples), others are more difficult to relate to a specific type of asteroid. Some meteorites are completely unique and their parent planetary body might not exist as an asteroid or planet any more (it might have been destroyed in the earliest part of our Solar System in an impact collision event). Most meteorites can be grouped into the following categories:

There are many key science questions that can be addressed by studying meteorites that cross the disciplines of planetary science, astronomy, and Earth sciences. The type of science question we ask depends on the type of meteorite sample being analysed. We can learn about the following topics:

The science of meteorites is known as meteoritics. Scientists use state of the art technology in laboratories to investigate the chemistry, age and mineral makeup of meteorites. Some of these investigations require cutting the meteorite open and removing small portions for destructive analysis, others are non-destructive and require little processing of the sample. New experiments and technology means that we can study very small pieces (sometimes down to as small as 1 mg or a few mm in size).

The UK has world-leading cosmochemistry labs – you can find out more about these centres at the UK Cosmochemical Analysis Network website and the types of facilities that we are using to study meteorite samples.

Research results are published and shared with the community in scientific journals  and you can see the latest papers from the international community here and as our project undertakes meteorite research we will advertise our work here and you can look at the University of Manchester’s Earth and Solar System blog site.